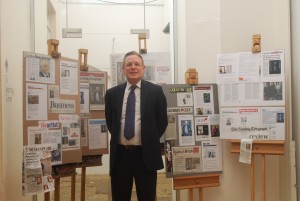 If you have an important event to promote then Richard has the experience and the talent to produce the best results. He has had significant success promoting THE ROYAL SOCIETY OF PORTRAIT PAINTERS’ Annual Exhibition at the MALL GALLERIES since 2002, obtaining enormous coverage in the national press, TV, radio and magazines for this event and has also promoted the Society’s PEOPLE’S PORTRAITS at GIRTON COLLEGE, CAMBRIDGE, a permanent exhibition where new works are added annually. The next exhibition of the RP will be held at the Mall Galleries from 5 to 14th May 2022 and the Society also held an exhibition of portraits with a theatrical theme at the Watts Gallery in Guildford in 2020.

Richard Fitzwilliams was Editor of THE INTERNATIONAL WHO’S WHO FROM 1975 to 2001 and arranged and fronted the promotion. He has many celebrity contacts who often attend his shows. he is also a royal commentator and film critic often appearing on TV and radio. HELLO Magazine has done a profile on him., He writes the Artscene column for the LONDON AND UK DATEBOOK and is also a lecturer.

He has promoted exhibitions of THE PRINCE OF WALES’S lithographs as well as photographs by JURGEN SCHADEBERG, the ART:ARCHITECTURE exhibition and a show linked to the designer LINDKA CIERACH for THE BELGRAVIA GALLERY. He promoted the annual LYNN PAINTER-STAINERS PRIZE for four years and has publicised events at HEATHERLEYS SCHOOL OF FINE ART and THE ART ACADEMY. He also promoted the HIGH ABSTRACT EXHIBITION in 2011 and a Retrospective of work by the Scottish artist ALEXANDER GOUDIE in 2016.

Richard Fitzwilliams has acted for artists such as DAPHNE TODD (promoted exhibitions 2009, 2012, 2015), MICHAEL NOAKES, JEFF STULTIENS and SHENDA AMERY including a bust in 2017.

He has also promoted THE BEST ACTRESS, a novel by ELIZABETH SHARLAND, a biography of MILES, DUKE OF NORFOLK by GERARD NOEL and an event for THE PRINCES TRUST sponsored by DLA.

He helped with the promotion of an event for HELP FOR HEROES at The Naval and Military Club in 2008, a KIDS FOR KIDS event at Seagrove House in 2011 and THE NOWRUZ DINNER at The Institute of Directors in 2014.