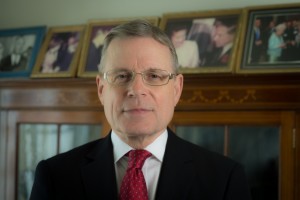 His live commentaries include coverage of the inauguration of King Felipe V1 of Spain in 2014 and his wedding to Letizia Ortiz in 2004, the Queen’s Diamond Jubilee Address to both Houses, Prince Albert’s wedding to Charlene Wittstock  in Monaco, Prince Rainier’s Funeral, the announcement of Prince Philip’s retirement, Trooping the Colour (all for CNN), Trooping the Colour and Prince Harry passing out of Sandhurst( both for BBC News Channel) and the Queen’s 90th Birthday walkabout (for CTV). He broadcast live on the wedding of the Duke and Duchess of Sussex for The Royal Box at Yahoo.com and on Archie’s birth and christening for CTV.

He did 90 media interviews on the wedding of the Duke and Duchess of Cambridge, 80 on the birth of Prince George, 60 for the Queen’s Diamond Jubilee, 30 for the 20th Anniversary of Diana, Princess of Wales’s death, 25 for the Duke of Edinburgh’s retirement, 50 for the engagement between Prince Harry and Meghan Markle, 40 on Prince Andrew’s Newsnight interview and 30 on Accession Day 2022. He also covered the Inquest into the death of Diana, Princess of Wales. He did numerous pieces for CNN from Windsor and London on the wedding of the Duke and Duchess of Sussex,, also being used by BBC World TV, ORT (3 interviews), Channel 7 (Australia), France 24, Newsweek etc. He also did several interviews when Prince Charles turned 70 and when Archie  was born and around 130 interviews during the fortnight which led to Harry and Meghan stepping down as senior royals in January 2020.

He has followed the lives of members of the royal family since being Editor of THE INTERNATIONAL WHO’S WHO which included a special section on world royalty and he has done interviews on all major royal news stories. He comments on the Prince of Wales’s finances after attending the Annual Review at Clarence House. He has reviewed the royal year for the BBC News Channel and CTV (2019), and the Queen’s Christmas Broadcast for Sky News.

As a committed monarchist he often debates the merits of the monarchy (Sky News, BBC News Channel, Channel 5, BBC World Service and on numerous radio stations). He has attended Royal Ascot for four decades and has broadcast on it for CNN, CBC, NBC, RTL, AB and BBC GNS. He has done pieces on the importance of the royal family to the Commonwealth including on Inside Story (Al Jazeera) and the Today programme (Radio 4) and written an article on The Monarchy and the Commonwealth for The Round Table. He has lectured on royal matters to the University of Syracuse, the Oxford and Cambridge Club and the Naval and Military Club. He has commented on royal portraits as he has been Press Consultant to the Royal Society of Portrait Painters since 2002 and he also attends previews of events arranged by The Royal Collection. He also comments regularly on the bi-annual Honours List as former Editor of The International Who’s Who and has given lectures on it. He is a film critic whose specialities include monarchy on screen on which he wrote in The Express (Jewels in the Crown, whole page article 2012) and did numerous reviews of the Queen and The King’s Speech. He is often quoted on royal matters in the national and international press especially in Washington Post, USA Today, Express online, BBC News Online and Mailonline. He has appeared in several television programmes on the royals and on the US chat show, The Jim Jefferies Show, in 2018. He has appeared in numerous Channel 5 documentaries on the royals 2019/20.

His illustrated talk, the British Monarchy on Screen, was given at the Lansdowne, Oxford, the Cambridge and Cavalry and Guards Clubs and the Westminster Library during 2017 to coincide with the release of the second series of The Crown which he reviewed for IBTimes in December 2017.

He wrote a tribute to H.M. the Queen’s Platinum Wedding Anniversary for the Express online https//www.express.co.uk> News > Royal.  Queen and Prince Philip’s marriage is the “ultimate in teamwork” in 2017.

He contributed to a piece about the royal links to Game of Thrones for BBC News Online  http://www.bbc.co.uk/news/entertainment-arts-40972990 in 2017

He was quoted in the New York Times https://www.nytimes.com/2018/04/27/world/…/uk-louis-arthur-charles-royal-baby.html  Louis Arthur Charles: The Royal Baby’s Name is revealed in 2018.